This award is the highest honor District 3 Toastmasters can bestow upon a non-Toastmaster. It recognizes individuals within our communities who have demonstrated outstanding communication & leadership skills. Any member or club in good standing can nominate someone for this award.

This award is to be presented by District 3 at the Hall of Fame Luncheon at the upcoming District Conference.

Past Communication and Leadership Award Recipients

Being named an Outstanding Toastmaster of the Year honors members who embody the Toastmasters core values: Integrity, Respect, Service, and Excellence. A committee reviews and selects Outstanding Area, Division, and District Toastmasters

Outstanding Toastmaster of the Year Award

Outstanding Toastmaster of the Year (OTMOTY)

Each year, all Area Directors in good standing and completing their term of service are eligible. Congratulations to these past Area Directors recognized for their leadership and service contributions to the District. To submit someone for this award (even yourself), fill out an application form to be reviewed by the committee, and announced at our annual awards celebration.

Each year, all Division Directors in good standing and completing their term of service are eligible. Congratulations to these past Division Directors recognized for their leadership and service contributions to the District. To submit someone for this award (even yourself), fill out an application form to be reviewed by the committee, and announced at annual awards celebration.

In recognition of those who have shown excellent dedication to the Youth Leadership program.

Betty was a longtime member of District 3. She joined the Eyeopeners in Tucson in 1976 and Catalina club in 1990. During the 1980’s, Betty was an Area and Division Governor and achieved her Distinguished Toastmaster award.

She and her husband, Bob (a past Division Governor), were very active in youth leadership and helped influence many other Toastmasters to get involved with the Youth Leadership Toastmasters Program. Bob and Betty were always present at District 3 Conferences, even as their health began to decline.

In recognition of those who have shown excellent dedication to the Youth Leadership program:

Each year at the discretion of the District Governor, a deserving Arizona Toastmaster is presented the Russ Backus Award. The recurring award is presented to recognize members for their continual service to District 3 and to the Toastmasters program.

Established in 2004, the Art Nieto Club Excellence Award recognizes an active member dedicated to raising the standard of excellence in District clubs.

The 2004 Spring Conference saw the inauguration of a new award—the Art Nieto Award for Club Excellence.  DG Joe De Rico suggested we should not wait until people were gone to recognize their contributions to District 3 Toastmasters and noted that Past International Director and 3 time District 3 Director, Art Nieto, a 30-year member of District 3, has been Club Extension Chair for more than twenty of those years. Joe went on to say that Art was demonstrating exemplary service to Clubs, particularly new Clubs. The DG said this award would be a namesake to the legacy gift of Art Nieto.

The purpose of this award is to recognize a Toastmaster who contributes exceptional service to the Clubs of the District. While Club officers serve their Clubs as part of their position descriptions within the Club, this award aims to recognize someone beyond the Club level who goes beyond the call of duty in service to Clubs.

The Juris Kursulis Sprit Award is bestowed at each District 3 conference upon the person who demonstrates unusual enthusiasm, dedication, and caring for District 3 and its members. The award is in the name of Past District Governor Juris Kursulis, DTM. 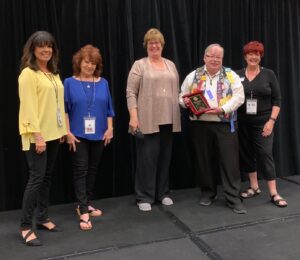 The Juris Kursulis Sprit Award is bestowed at each District 3 conference upon the person who demonstrates unusual enthusiasm, dedication, and caring for District 3 and its members. The award is in the name of Past District Governor Juris Kursulis, DTM.

Juris and his wife, Betty, were regular attendees of District 3 conferences for over 30 years. Juris always sported his vest from the 1981 International Convention hosted in Phoenix, and continued to festoon the vest with memorabilia, ribbons, pins, and awards. In 2004, when Juris knew that he had not much longer to contribute to the District, he asked International Director Nancy Starr-Cassidy to take possession of his beloved vest with the promise that it would be used to do something “good for the District.” What better way to honor Juris than to honor those who continue the tradition of caring and giving?

The award is presented at the Hall of Fame Luncheon at each District conference. The winner must be present to receive the award and to earn the right to wear the Vest!

Juris came to America as a teenaged immigrant, escaping war in his homeland of Latvia. He became a U.S. citizen and joined the Air Force, where he met his bride, Betty, and her two amazing daughters in New Mexico. The family moved to Arizona where Juris went to work for Motorola. He became a member of Voice of Motorola Toastmasters (now Voice of Many), where he remained a member the rest of his life. In 1995, Juris helped form the Leaders Plus club, where he also remained an active member until his passing in 2005.

Juris was a man “bigger than life”–passionate about family, service to the nation, and Toastmasters. He was an outspoken, active member of the Past District Directors Committee and was always willing to challenge leaders 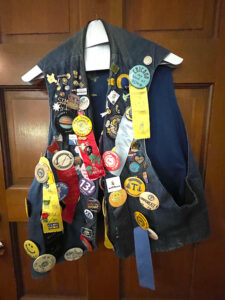 to ensure they were doing the right things for the right reasons. In later years, as he needed a cane to assist with his walking, he was known to wave the cane to add emphasis to an important point.

Unknown to many, this bear of a man was truly a gentle giant,always ready to share a quiet word of encouragement to leaders as they made difficult decisions or took other actions that showed their growth as Juris’s Vesta leader, and was a friend to many. He held us to a higher standard, and for that we were grateful.

In 1981, Phoenix served as the host District for the International Convention at the Phoenix Convention Center. The host committee volunteers received vests made of blue denim, embroidered with the conference theme and date. Juris served on the host conference committee, and wore his Vest at every conference thereafter.

This set of awards recognizes the outstanding service of district leaders.