Fountain Hills Club was the “Toast of the Town” 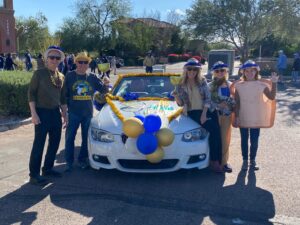 Fountain Hills Club #6993 was the “Toast of the Town” at the Fountain Hills Thanksgiving Day parade. Club members Matt Gurtatowski, Tom Lindsey, Valerie Krugh, and Alyson Reichstein (plus honorary Toastmasters, Kim, Pat, and Michael) went all-out in decorating their float (and themselves) based on the parade’s theme, “All That Glitters.”

Participating in the parade allowed Fountain Hills Club to showcase many of the hidden benefits of Toastmasters membership. Including friendship, camaraderie, and a sense of community. So, it served as an opportunity to raise awareness for the club and the Toastmasters organization. The parade’s announcer read an introduction written by our President Valerie Krugh. In it, she invited people “to engage in sparkling conversation while [building] self-confidence, communication, and leadership skills in a fun and supportive environment.” VPM Alyson Reichstein, who was aptly named “Toast Lady” by the children of Fountain Hills, handed out Mardi Gras beads with an invitation to join the club for their meetings on Wednesdays at 6:15 at the Fountain Hills Chamber of Commerce. Treasurer Matt Gurtatowski proudly carried the club’s banner in front of the parade float. He ecstatically waved to the crowd with his sparkling gold gloves.

The parade truly was a full-club effort from the very beginning. Despite the wind chill, everyone had smiles on their faces as they toasted the town. They enjoyed wishing the community a Happy Thanksgiving. Our Vice President Education Tom Lindsey, who “isn’t a parade guy”, exclaimed the club should participate in the parade every year. With a whole year in which to plan their float and costumes, there is little doubt that the club’s entry next year will be bigger, better, and even more fun. 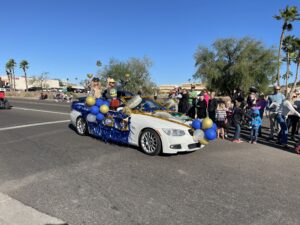