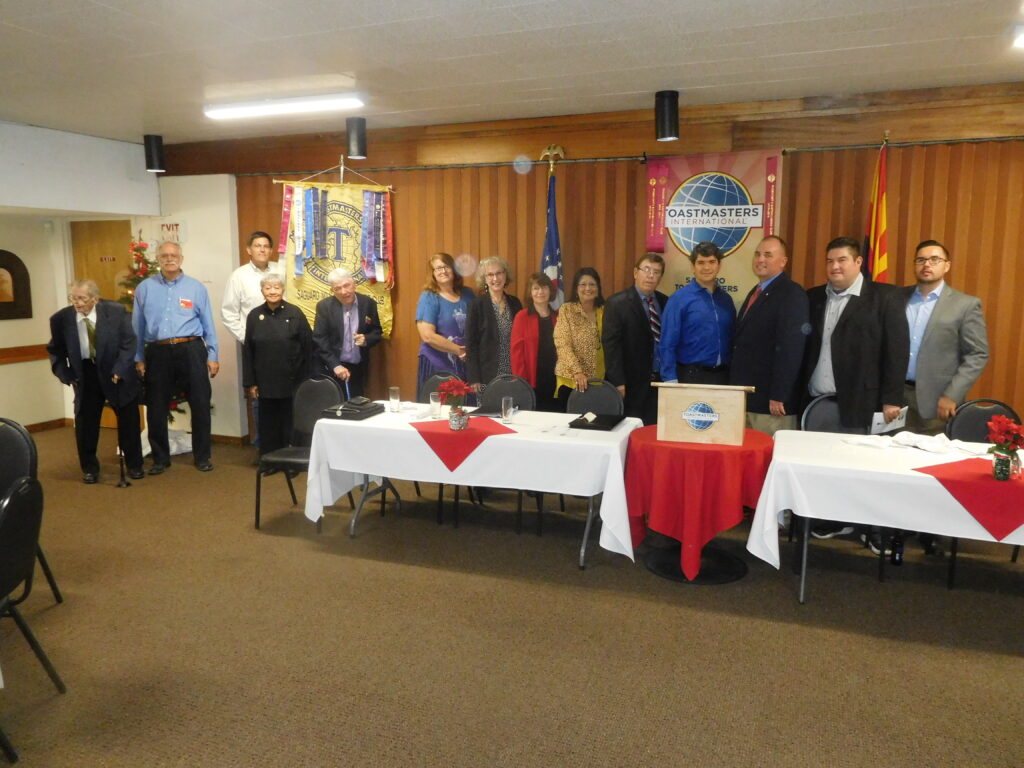 Here is a question for Toastmasters buffs: ”What Toastmasters Club hosted the first International Convention East of California? Where was it held?” answer later on).

On Dec. 2nd 2019, Saguaro Toastmasters Club # 16 held a very special 85th Anniversary meeting at the Sabbar Shrine in Tucson, Arizona, to commemorate their Charter Date of Dec. 4th, 1934. The oldest club east of California was mentioned may times by Randy Carasez, DTM, past President, in his speech “To Speak, To Lead, To Help”. Saguaro TM was first of five clubs that Chartered District 3, on Feb. 19, 1937. Other Clubs were: #32 in Tucson, no longer active, #68 in Phoenix; #73 Copper Gavel in Miami, (now Superstition  in Mesa); and #74, Old Pueblo in Tucson (now Sunrise). The first Saguaro Toastmaster meeting was held in Down Town Tucson, AZ at the Pioneer Hotel according to William Griffith, a Chartered member of Saguaro TM, at the Saguaro Toastmasters 60th Anniversary. Ralph Guthrie, a Charter member, was an International President from 1939-1940 and a member until the early 1960s. Jim McBain was a continuous member for over 50 years and was present at the Celebration. According to McBain, who met Ralph Smedley, Smedley would speak at the club in the early days and was a great speaker!

Saguaro Club President, Dave Davis opened the meeting with welcoming remarks and introduced past District 3 Governors Jim Davis (DTM) 1988-89, and Jim McBain (ATM), 1961-62. John Stutz, (DTM), a forty year member and past President was introduced as Toastmaster. Opening remarks included that Saguaro TM over 85 years has helped many in the Tucson Community to improve their communication and leadership skills. People still come to the club today seeking improvement in their communication skills. The Club has helped many prominent business men and attorneys in the Tucson community to benefited form this club, such as, Past District Governor s, Paul Jones District 3, 1948-49 and Jim McBain, District 3 Governor 1961-62 and Governor for the state of Arizona, Raul Castro, now deceased.

Randy Carasez, (3 DTMS), Past President, gave a speech why the Saguaro Club is still in existence today! The Title of his speech: to speak, to lead to help!

Don Edwards, DTM, and 90 years young, guest speaker and member of Executive Toastmasters gave a speech on gratitude and willingness to “say thank you” when appropriate.

Loretta Williams, DTM, a former member of Lompoc Toastmasters in District 33 gave a speech entitled: “We are family”. She stated that joining Toastmasters is like joining a family and talked about her experiences. She grew up in New York City and was a Toastmistress in 1960 in Germany when Toastmasters was a mens’ only organization. She is an Air Force Veteran!

Allison Jones was introducted as the Topicsmaster. She is a Hydro geologist and currently serves as chair of the board for Pima County. The topics were of general nature about Toastmasters affects on a persons life.

Closing Remarks by Toastmaster: One of the reasons I belong to Toastmasters is to give back support to others because for support I have received in the past. A theme from a Past District Governor was “Friends helping friends to succeed”. This is what Saguaro Club has provided. As Ralph Smedley said, “The nation needs better communication and so does the whole world. Through better communication the world receives better understanding and understanding is what the world needs.” For 85 years Saguaro TM has been part of this mission and will continue to be in the future.

Special Thanks to Brian Hanner, Education VP, for acquiring and setting up the room for the event and putting the program together.